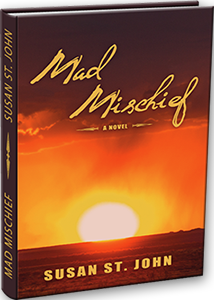 Susan St. John makes an exciting debut to join the pantheon of writers of psychological fiction bookswith her story of an elite African safari that is transformed into a psychotic journey of survival. Mad Mischiefuses the shimmering beauty and primal power of sub-Saharan Africa as the setting for a powerful story of love, deceit, obsession and ultimately, escape and redemption.

Mad Mischief is the haunting tale of Sarah – a woman struggling on a life-altering African safari with the self-absorbed behavior of her husband and their erratic safari guide, the unscrupulous actions of a Nairobi shopkeeper, and the enigmatic behavior of a world-renowned photographer who inexplicably appears when she is in desperate need of a guardian angel. Her very consciousness altered by an adverse reaction to anti-malarial medication, Sarah barely maintains her grip on reality as she travels through the exotic game parks of Kenya and Tanzania. Finally winding up in the city of Nairobi, she bravely confronts the roguish men aiming to take advantage of her drug-induced state of mind. Her life and sanity nearly slip away until she is rescued, and ultimately emerges with a transformed state of mind and a once unimaginable core of strength.

As a bipolar author, St. John drew abundantly from her own personal journey to find resiliance, strength and redemption to pen this psychological thriller novel. Destined to become one of the very best fiction writers, she has crafted one of those edge-of-your-seat adventurous novels which takes readers on an unexpected, panoramic, dazzling page turner. This story of courage about a woman who confronts and overcomes psychological warfare and internal chaos unfolds on the stages of real time and mind time, creating an increasingly gripping level of suspense. St. John’s book set in Africa quickly takes readers on an exotic journey far beyond a heightened sensitivity for exotic scenery and wild life, giving new meaning to the words “mad mischief.”

Susan St. John has a singular, pitch perfect voice so characteristic of top fiction novels. Reaction to St. John’s masterful tale of adventure has therefore, not surprisingly, been overwhelmingly positive, particularly among readers whose taste leans towards women’s books that highlight inspirational fiction and psychogical fiction novels. Mad Mischief is so well-received that it has already been added to the Spirited Woman Top 12 Book Pick List.

Explore the complete Mad Mischief website to read book reviews, learn more about this extraordinary African fiction novel, and download a complimentary sample book chapter of this riveting novel. Buy a copy of Mad Mischief at Amazon, Barnes and Noble, MyBookOrders.com and other online book sellers.